You are here: Home>Topics>Developing a new town>Mrs Lillian Cowdery discusses builders' living arrangements during the creation of Stevenage 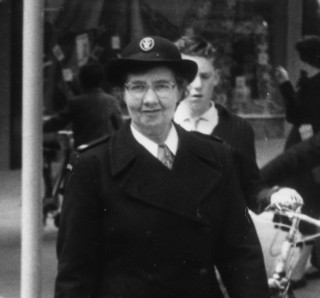 The Residents’ Association which they, my husband was one of them and Hilda Lawrence were there to take any complaints, used to go around and there used to be meetings of all the workers and the men workers, there was a lot there then. Somewhere round about 600. Yes and of course all they lived in and all had their homes and their families there. And some of them came from Ireland and they were housed in kind of little flat things, little rooms where there used to be a community. That would be on Elder Way, which is Elder Way now.  Just there, there is a line of houses for Irish men who weren’t married that used to come here just to work on the town and there used to be a Community Building there for their eating and they went in to these little places for sleeping.