Gerald Model came to Hatfield to set up a new Chiropody practice. He comments on the changes he saw, living in the Roe Green area of Hatfield after he moved to Hatfield from St Albans in 1959:

"Changes in Hatfield" By Gerald Model 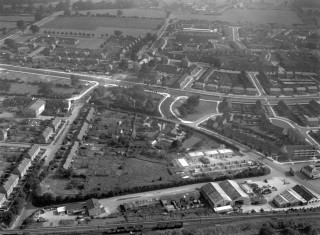 “When we moved here it was fairly well a Greenfield site.  Opposite we had the playing fields of the Hatfield technical college and Hatfield School as it was in those days, and so it was wide open and we could see the towers of the Abbey and St Peter’s from the footpath outside the house.  Gradually the housing has been built up around, but particularly opposite us on the field we had the development of the housing for the students, which has obscured our view and enclosed us more although I must say we still have a very open and pleasant aspect- things don’t stay the same as they we were.  I think from the business point of view as anyone would say- the gradual demise of industry really- because a lot of industry has moved from this area.  And other changes that I saw through roundtable, rotary, and the Council for Voluntary service- all of which I have been active in – and I’ve seen the development of caring groups and interest groups and facilities, which I think a lot of people take for granted.”

Comments about this page