You are here: Home>Topics>Moving in>Donald Hodson - Developing Shops at Hilltop

The need for shops at Hilltop by new Hatfield residents, led the New Towns Commission to initially develop a row of temporary shops in new terraced Housing. Donald Hodson ran a chemists in this row, before moving to the permanent shopping precinct when built. He described more about this odd arrangement! 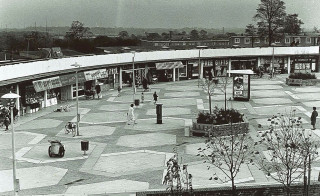 “The new towns commission had built housing in south Hatfield in the hilltop area in 1956 ish.  By the middle and late 1956 a number of people were living in South Hatfield and the nearest shops were at Cavendish, otherwise of course they had to go to the town centre, which was fairly rudimentary at the time.  And it didn’t go down well with people up there particularly with those who had small children and of course most of them had, because in order to get a house you tended to have a family.  And so they put pressure on the new towns commission who after some though decided well yes there was going to be a row of shops at Hilltop but their priority was the supply of housing.  So rather than build the shops straight away they took a group of five houses in a terrace in hawthorns, which was a small cul-de-sac leading off Hazel Grove.  They put those to side and they offered them to business men who would take them on as temporary shops with the agreement that when the permanent shops became available they would have first refusal. There was a private grocer, there was a a Co-op grocer, a green grocer, Baileys the newsagents, Webster’s the butchers- I think that’s five.  The people up there still weren’t satisfied, they wanted a chemist- and so at the end of 1956, they decided to set aside one more house on the same row, and decided it better be a chemist.  so they put and advert in the pharmaceutical journal and it caught my eye. So I wrote wrote off to the new towns commission and said here I was a young pharmacist and what was all this about a temporary shop in Hatfield.  They wrote back and they sent all the details and said would you like to come for an interview –  so my wife and I went and after some little time I had a letter from them saying they would like to pursue it further but that I was very young.  I think that the new towns commission felt that they should be encouraging the young and besides that later heard that there were quite a lot of applicants but virtually every one was an established business. This was merely going to be a branch and I think that was the reason they called me in and we went back and I was put in the chair, and I was grilled.  And to cut it short I got the shop. And so in almost Easter 1957 I moved to Hatfield. First of all they couldn’t find us a house so we lived in the two rooms in what was above the temporary shop.  And in any case the shop needed to be sorted out and got moving.  We actually opened Easter week. [And did they fit out the shop for you?] No. I knew the shop fitters quite well and I approached them quite openly and said that if they would do the job they would have to give me credit and take the cash over a period of time and in the same way I approached all the suppliers that I needed, told them that I would do my best to pay them as quickly as it was possible to do, but that there would be a delay of a couple of months before I could start making payments and so on.  So what happened was I simply got some deal shelves and a few brackets, and put some shelves round the wall of the living room. And the kitchen became the dispensary, of course the kitchen cupboards came in handy and there was obviously a sink and a work surface.  I bought a second hand very very old counter that the shop fitters had removed, and opened Easter week 1957.  And we weren’t there long because they got a move on with the shops and by the end of that year some of the other businesses were actually moving in.  I was the last to move from Hawthorns and I moved in the January.  I was desperate to get over there for Christmas but I never did make it.   So in Jan 1958 I moved into high view as it then was.  It was a popular development I think there was quite a bit of competition to get in there.  I would say that by Easter that parade was fully functioning.  The Co-op grocer supermarket was at one end, Fine Fare were at the other end, there was a small private grocer in the middle- that was Fred Salmon who moved in from the temporary shops, Baileys ran the newsagents and there was the greengrocer who changed hands a couple of times in my time that I was there.  There was also that very good hardware shop- Keco’s- and so it was a very successful parade.  Successful especially in the beginning because bear in mind that what you call ‘New Town’ was not developed.  The first proper supermarket in Hatfield was on our parade and people came from all over Hatfield to Hilltop because it was the best shopping centre in the town.  We had a great time really till the town centre started to develop at which point people were obviously no longer interested in going to Hilltop.”