You are here: Home>Topics>Developing a new town>Eric Claxton about creating a safe town 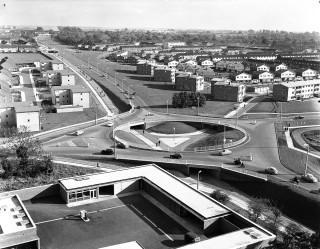 I had this phone call from him and I, I could have, I was so enthusiastic I’d have slid down the phone if it had been possible. Anyhow, he said to me, “If you’re, if you are interested, I suggest you make an appointment to see Professor Holford, and this I did.  And I don’t think, I don’t know, perhaps I did have an interview with Holford, but I knew at the end of the, of a couple of hours’ conversation that I had a job, and of course the job they set me to do was to be engineer to this little team who was designing Stevenage.

Gordon Stephenson was the  leader, and Peter Shepheard was my architect opposite number. So Peter and I created the plan for Stevenage, and if you look at that original plan that we made in ‘46 and you look at the town of today, it’s only different in detail.

Now that was a very fascinating year for me.  I started on the first of January ’46, and I was immensely conscious of the fact that,  in 1914 I think it was,  Lloyd George had given a talk in London amongst which he said, “And what is our purpose?”

And he then answered his own rhetorical question  – “was to create a land fit for heroes to live in.

Well, I’d lived through the bit after that.  I wasn’t enamoured of the land that we were made to live in, and I reckoned that perhaps this new town project was really the first decision to honour that state of affairs.  So it put me very much on my mettle to try and create a very safe and convenient, and comfortable town for people to live in.

Behind all this was my experience of the terrible carnage of wartime, and in my heart I, I’d made up my mind that if I could possibly help it, nobody should ever be injured again.  So, Stevenage sets out, and it set out from its very beginning to be as safe as I could create it.