Leonard Vincent about traffic, residential areas and cycleways in Stevenage

The planning of the main roads and the building of an independent cycleway network made Stevenage a safe town. 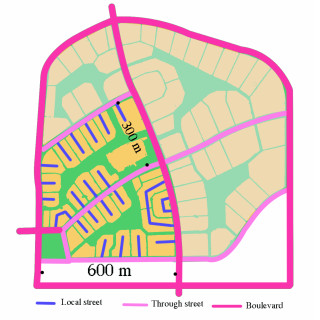 Mr. Vincent went several time to America to study the work of Clarence Stein1 on the town of Radburn  (New Jersey) in order to import and adapt it to England.

“I knew Clarence Stein well and I went over to America at some time and looked at what he had done and we adapted it to the English idea, which he personally didn’t think much of but still it worked.

Some people liked it, some people didn’t but the idea was to keep traffic out of residential areas.”

Stevenage is a “safe town”. Why?

The fact that Stevenage is safe is due mainly to two factors: the traffic is kept out of residential areas and the bicycles have their own cycleway network.

“Well, two main aspects of that I suppose: pedestrianisation of the town centre and a lot of the layouts in the residential areas. The Radburn layout, which is primary to keep traffic out of the front of the houses and the cycleway system which was Eric Claxton’s main idea, which he was very keen on because he thought it was right, we all thought it was a jolly good idea. So that children going to the secondary schools needn’t cross main roads and people cycling generally or walking didn’t have to cross a main road if they didn’t wish to. So that’s the main aspect of it and of course the pedestrian town centre.”

1. About Clarence Stain and the Radburn design:
Clarence Stain was one of the architects in charge of the urban planning of Radburn, New Jersey.  This innovative town, used as model and inspiration for designing many towns around the world, has been planned accordingly to some key principles which included:
– the separation of pedestrian and motorised traffic;
– the building of residential blocks that include green areas and have no large roads passing through;
– and the choice of industrial area sites which have to be easily served by road and railway connections without being a nuisance to the population.