You are here: Home>Topics>Developing a new town>Leonard Vincent about the industrial area of Stevenage

Leonard Vincent about the industrial area of Stevenage

The planning of Stevenage was used by the Government as a Guinea Pig to amend the writing of the New Towns Act. Among the issues taken into consideration there was the siting of the industrial area.

Stevenage as a Guinea pig for New Town planning

The Government needed a way to know what problems they would need to face as a consequence of the New Towns Bill.

“The story behind that goes right back to 1946 or even before. You probably know that before the end of the War or just towards the end of the War, the Government were doing this New Towns Bill operation and they used Stevenage, the idea of planning Stevenage, as a bit of a Guinea pig to see what problems it would throw up and how it would influence the writing of a New Towns Act Bill and because of past experience in pre-war days, if they put factories on the west or south.” 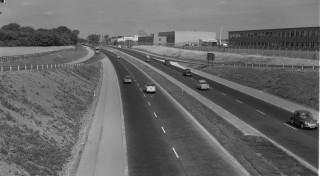 The siting of the industrial areas in Stevenage I

The site for the Gunnels Wood industrial area was chosen taking into account the prevailing wind, the possibility of rail spurs and the existing plans for the improvement of the old A1.

“In the original plan there was only one industrial area, that was Gunnels Wood area and that was sited there because it was thought that the prevailing wind would not cause much problems as far as the residential areas, it would blow towards the north east, the railway separated the industrial area from the town but there could be spurs from the railway into the industrial premises quite easily and there was to be the A1 (M) as it is now called or bypass or improvements to the old A1, which was on the stops as early as 1938, I think it was in the Bressey Report1 that the bypass of Stevenage was mooted.” 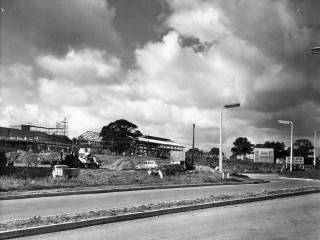 The siting of the industrial areas in Stevenage II

“..west side yes, to, to avoid smoke fumes and smells from drifting over residential areas. Now surely Gunnels Wood, if the wind was from the west or the south west all this would be carried into areas like Bedwell, Pin Green and the east of the Old Town?”

“Yes that’s perfectly correct, as I say, when I first saw this I thought myself it was an odd way of thinking, but the excuse given me at the time was, and I suppose it was that of course there wouldn’t be any such factories, they were all these footloose industries that were highly technical or electronic or equivalent of the early electronic stuff and there wouldn’t be any belching smoke or anything like that so it didn’t matter, and that’s really the answer in the end, it was accepted that it didn’t matter, I think that’s fairly true.” 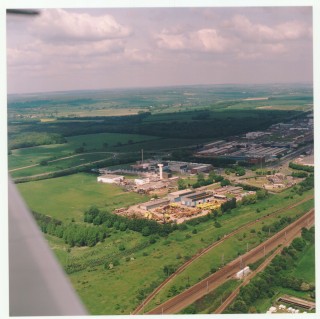 The planned industrial area was too big, therefore Mr. Vincent split it into two. Perhaps three areas would have been even better to fluidify traffic flow at peak times.

“But what was wrong which I thought and which I altered was to cut down the size of that industrial area, of course it extended from the extreme south of the west side of Stevenage to the extreme north virtually, to cut it down for two reasons, it was too big, the traffic flow (and in conjunction with the engineers on this – the transport engineers), at peak times was like a tide one way and then the other way back and that caused problems so I, in the 1966 plan of Stevenage, I cut down the size of the western industrial area and established a new one up in the north east….My own view about the whole thing is that possibly Stevenage should have had three industrial areas to split the size because they do cause traffic problems at peak hours.”

Are railway spurs a benefit?

The benefit of having railway spurs that reached Gunnels Wood was one of the reason to choose it for the industrial area, but in the end all industries preferred road transport!

“The other interesting thing on the railway is that in all the work of Stevenage on the industrial side only one firm, Bowaters, had a railway spur in and then they took that out some years later because they found that it was better to use road transport.”

1. The “Bressey Report”
Mr Vincent refers here to the Highway Development Survey for Greater London that was commissioned in 1934 to Sir Charles Bressey, engineer, and Sir Edwin Lutyens, architect, by the Ministry of Transport, because of the huge increment of the number of cars on the roads. The report, finished in 1937 and published in 1938,
– analysed the road transport network,
– highlighted the “centres of congestion”,
– proposed improvement and solutions
for both London and the surrounding area.