Even if around the world the popularity of pedestrian town centres was increasing, Stevenage planners had to prevail against a strong opposition put up mainly by the Multiple Traders Association. 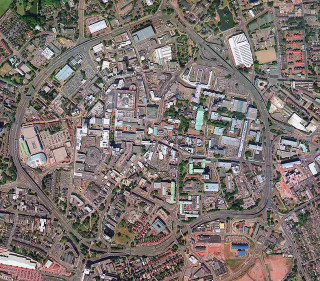 About the shift towards pedestrianised town centres

Around 1950 in Europe as in America “the conclusion that it was a good idea to keep traffic out of shopping centres” was spreading.

“Well, I think that to most architect planners round about 1950 had come to the conclusion that it was a good idea to keep traffic out of shopping centres, one knew of the experiences of America, bearing in mind that though we had gone through a war and hadn’t seen all that increase in traffic until immediately afterwards, America hadn’t been affected by war as regards domestic situation and they were suffering. So the idea gradually built up that this was the right idea, Coventry had the same and also Rotterdam had the same thing and we used to get together with Rotterdam Civic people and Coventry Civic people and discuss things and Coventry started for us in Britain, you could say that they were first off the mark but we were closely behind and sort of tended to overlap. We were still thinking there but they actually got physical construction mainly because of the War devastation, Stevenage didn’t suffer anything like that so that point didn’t arise.” 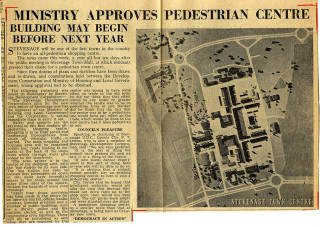 Advocating the pedestrian centre in Stevenage

At the time the vested interests were scared and strongly opposed the project for a pedestrian centre seen as “a recipe for disaster”.

“Oh yes! Well, the opposition to pedestrian centre was enormous but mainly from what I might say was the vested interest as they were, in the sense that they thought it was a recipe for disaster. I remember addressing the Multiple Traders Association on our proposals for Stevenage and they just thought I was round the bend. They thought I was one of these long haired, I’ve never had long hair, by the way, they thought I was one of these long haired ideologists that hadn’t really a clue what it was all about you see and had a bit of a rough time quite frankly but I was proved right. In fact so much so that one of the big advocates of non pedestrian centres, one of the Directors of the firm that advised many, many people said to me in a letter, which I thought was very nice, he said Mr Vincent you were right and I was wrong…..This was in 1970ish, eight or nine years later perhaps ten. When of course all the town centres were being thought of being changed to pedestrian centres.”