You are here: Home>Topics>Entertainment>Jessie Axford - The Church and Women's Fellowship

St John’s church opened in Hatfield in the 1960s after a series of fundraising activities including the sale of shilling brick cards for the church building fund. Jessie Axford describes more about the Church and worshipping there: 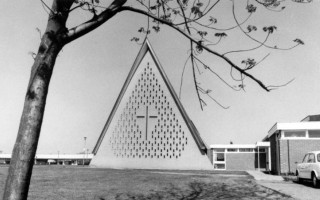 “The vicarage was built and Reverend David Farnborough and his wife Angela were there.  Angela started a Women’s Fellowship, we met in the hall of Hazelgrove school.  Sunday worship was held in the Cavendish Hall.  We bought one shilling bricks each week, having cards marked in bricks for the church building fund.  When St John’s church was opened in the 1960s we had two morning services- the communion service at 9 o’clock and family service at 11.  This was a packed service of three hymns, short prayers, and easy sermon and bible readings.  We carried on with the shilling bricks for the youth club and community hall to be built.”