Mrs Winnie Hampson was a pioneer in Stevenage 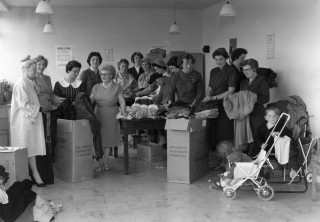 Interviewer: Did you, did you…were you aware of any ill feeling from the old inhabitants?

Interviewee: Oh yes they resented us they thought we were all er…

Interviewer: Even though they were making a great deal of progress?

Interviewee: Oh yes, yes the majority of them er thought we were all slums and I had to say that my husband was a great deal better educated than some of you and a lot of people that er were there. But um er it was an overspill for the bombed out in London and these people had never had a proper house before and they were, they were so pleased to come and have a proper house with a garden. This was what they liked and um there was a um lot of goodwill between the corporation and the, the people of Stevenage, the new people. And er we lived in Leaves Spring, which was near Shephall Church and er, the church was falling down; the floor was rotting, it had been neglected for years and er. About 12 people went to church there in, um, the time we started to go and er and it er, really was sad that it was so neglected. And of course you see all the people who, all the young men had gone and got some other jobs; there were no jobs except farming and agriculture.