Hilltop Community Centre and Public House was at the centre of its local Community. Donald Hodson described more about what was on offer there: 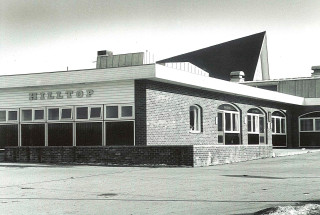 “Hilltop must have opened about 1961- or 1960-1961.  I remember the church took an interest. They officially opened it with a hymn a song and a prayer.  It was intended as a community centre, it was the pub, part of the deal as I understand it with the management of the pub was that they would clean and maintain the community rooms.  The idea was it was reciprocal and they would gain from selling beer to the people who attended functions.  They were also entitled to charge for hire of the room.  It was well known through the town, there used to be a programme of events. They had different sized rooms which could be hired at a different price for whatever you happened to need.  ………………..In the early days myself and others we formed a cinema club, we hired films in.  We used to hire the big room at hill top and show art films, the films that often didn’t come up in the commercial cinema.  It was quite successful for a while, but with most things like this people drifted away.  It was well known through the town.”