A baby clinic was initially held in Hatfield at St John’s mission hall. In 1959 the Women’s Voluntary Service (WVS) started a Mother and Baby Clinic at Hilltop.  Jessie Axford describe the development of the clinic and the activities it ran: 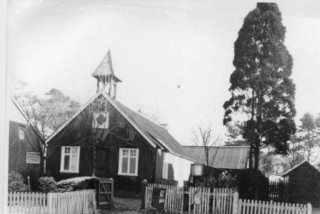 “The baby clinic was held Friday afternoons in the St John’s mission hall in College Lane.  In Autumn 1959 a mother and baby clinic was started by the WVS (Women’s Voluntary Service).  It was packed and very noisy and mothers dwindled in numbers but too many for the smaller room off what started as a cafe and used only for a baby clinic at the side of Hilltop.  In the summer of 1960 Roe Hill house was used for the mother and baby club and I joined the WRVS to make it possible to run it.  We found mothers and children under 5 enjoyed this Tuesday afternoons break together as there was no other time for them.  It was not good in the winter months because of the distance and meeting children from school, so the venue was changed to Downs Farm where a lovely sized hall had been built and it was a very successful club, with old Mrs O’Brien then Mrs Jessie Jones making tea and orange squash and washing up. We had a varied Programme.  At Christmas we had a party and a presents for all the children.  At one time I had thirty children under 5 to buy for, at a cost of 3 and 6 each present.  Every New Year we went as a block group to Break’s pantomime which was always very good and appreciated.  In the summer through the WVS a coach was hired during the summer holiday, so children went to Wicksteed Park- being a favourite place.”