"Moving to the Ryde" By Donald Hodson 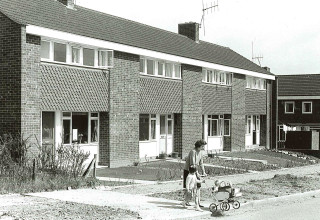 “I found us a house in Hillcrest, just of Hazeldine Meadows area.  It was a two bedroomed house, quite pleasant and we lived there for about 4 years.  In the meantime we had children, the eldest girl born in 1958, the second girl in 1960 and the youngest born in 1962.  But I think we were just about to move then. [tell me about the move from your Hillcrest house]. We rented that naturally, and then they started to build these houses on ‘Millionaires Row’ as we locals knew it and I looked at these houses and decided that that’s where we’d go.  It was a four bedroomed house which meant that with 3 children that was quite handy.  This was in the Holdings on the Ryde Estate.  It was the first road in the Ryde to be developed.  It parallels the Hertford Road.  The bottom of my garden was on the Hertford road. [So when was it that you actually moved into the Ryde?]  It was the year before that terrible winter we had- so we must have gone in 1962.  And we got fed up- we waited years for that house- it took ages to build it really did.  We stuck it out and in the end it arrived and we stayed there until 1978.”