... the whole site was covered it was also very muddy and when Evelyn Denington saw the site, she was pretty horrified because it just didn’t correspond with her idea of what a nice tidy new town should look like ... 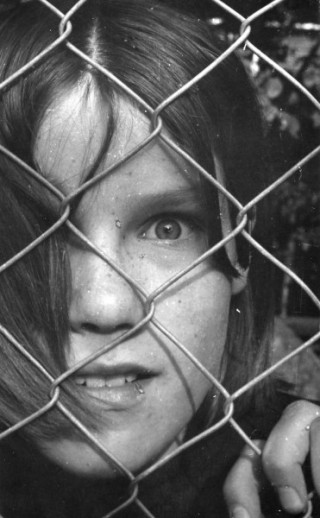 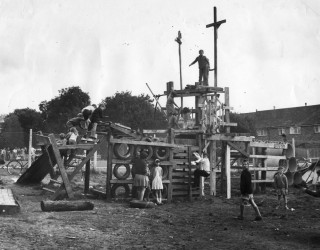 Oh yes, well, Lady Denington, she was the chairman of the Development Corporation at that time, she knew about the project and of course it attracted a lot of press attention, she saw what the kids were doing there and what the local committee had managed to achieve and so one day she turned up in her Corporation car and the first thing she saw was an open fence with what looked like a squatters camp because the children were absolutely devoted to building their own dens; a place of their own. And every family, every small group had their own den and sometimes they just, like a couple of palettes nailed together, sometimes it wasn’t even that, sometimes it was just a few branches made into the shape of a wigwam with no cover but it was enough for a few girls to identify as a house of their own.  Some of the building became very elaborate, two storey even and sometimes they even managed to get a stove into it! But on the whole they were quite simple structures. But the whole site was covered it was also very muddy and when Evelyn Denington saw the site, she was pretty horrified because it just didn’t correspond with her idea of what a nice tidy new town should look like. So she went back to the office and put in an order for the front fence to be replaced, a chain link to be replaced with wood and they didn’t altogether cover up what was going on because later on I built quite a tall structure on the front of the site which we called the boat, or the ship, which was about three storeys high with platforms which overlooked the fence, and we put up a flagpole with a flag on it and so on, but at least it established that we were there and we put the flag up when the place was open so that the kids knew when we were open.

Donne: During the school holidays we were open every morning including Saturdays but not Sundays, from about 9 o’clock until about lunchtime. I would take an hour for lunch, go home to Longmeadow in the old van, have some lunch and I would then rush back to open the playground in the afternoon.  This went on during the winter holidays as well, even when the site was covered in snow, I remember going to open up the playground, to start a fire for the kids to cook potatoes on and there were always children there wanting to use the site, whatever the weather.

Interviewer: What sort of time did it close?

Donne: As far as I remember, we it didn’t close until about 7 in the evening, you know, in the summertime. In the wintertime I suppose we closed whenever it was dark, you know, whenever it was getting dark.  It was open access in the sense there was no restriction on who could come and go, but we didn’t encourage pre-school children to come without their parents.  Very often it was used as a sort of gossiping place for the mothers. I have photos of quite large groups of mothers sitting round on old army forms chatting.  We could make tea, coffee for them and it was quite a social centre for the mothers as well as for the children.

Comments about this page