You are here: Home>Towns>Stevenage>Winnie Hampson>Hampson about the Queens visit in 1959

Hampson about the Queens visit in 1959 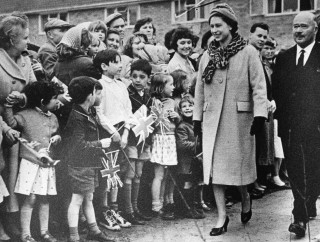 Winnie Hampson about queens visit to Bedwell Community Centre in 1959

And it was great excitement of course when the Queen came. And just before that Bedwell Community Centre was opened and my husband was the organiser of bringing the Queen here and taking her round. And we were all sitting on the platform and the Duke of Edinburgh was meant to come but he had yellow jaundice so he couldn’t come so the Queen came alone. And Lord Lieutenant of the County introduced all the other members of the corporation and various other people to him and my husband was among them being presented to the Queen and then he was in charge of the Queen for about an hour when he took her to Bedwell community centre. And I was there among other people and he presented me to Her Majesty and said ‘this is Mrs Hampson, my wife represents women’s organisations’ and then we went up to Aston, which was a centre for Development Corporation before they came to the New Town you see because no building were built.

And we had tea there with the Queen.

My husband had to arrange that you see, being the social relations officer; all these events. I remember there was great secrecy in the Bedwell. No one was allowed to go into the centre after all the windows and doors had been sealed, about an hour before the Queen came and so no one was allowed to come in and we were all standing outside. There was a little art exhibition and of course I’m an artist so I had some of my things in. And my husband said when he took the Queen round, she said ‘I see you do oil paintings’ so he said ‘yes that’s my wife’s’.