You are here: Home>Towns>Stevenage>Barbara and Peter Metcalf>Peter and Barbara Metcalf about the Roman find, and finding Tudor Glass in Stevenage

Peter and Barbara Metcalf about the Roman find, and finding Tudor Glass in Stevenage

A boy found a piece of genuine Tudor glass from the 1500s while Barbara Metcalf was teaching. 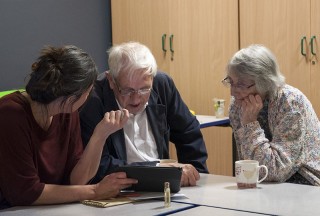 Barbara: And once at Round Diamond, one of, one of the seven year old boys I was teaching, brought, brought in a beautiful piece of blue glass, very very thick glass and it had a date stamped on it and the date, the date was Armada year, 1588. And I well no, I looked at it and thought oh this was something that was done as a commemoration of the Armada say, you know…

Peter: In the eighteenth century

Barbara: in the twentieth century but he…

Peter: It wasn’t, it was genuine.

Barbara: It was genuine.