The nursery quickly grew into a more of a modern garden centre with shrubs, pets department Albert the macaw and parking attendants on busy days. 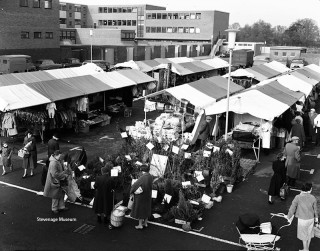 It was a low building.  It was very basic.  I mean at the time it seemed great, but it was very basic.  There was a very large car park. There was a big shrub area, there was fields at the back where they grew roses and there was also a field on the other side of the road that didn’t belong to the centre. I think it was rented from the council and that had rose fields in it.  There was compost and fertilisers and things for sale on the outside and then you went down some steps into some doors.  There was offices to the left, and then there was just the building with pots and plants, houseplants and then they added a big pet department.  We had quite exotic pets,  I know they had a big Macaw called Albert and he was sold to the owner of a big restaurant in Welwyn and actually he was featured in the Sunday Express at one point ‘cos this person used to take Albert to work with him on his shoulder and it was very, very famous.  I mean the car park needed attendants because it was just choc-a-bloc.  Everybody came there.  There was fish at the centre.  Everything. Andrea Cataldo