You are here: Home>Topics>Work>Ken Wright - the day I may have met Barbara Cartland!

Ken Wright - the day I may have met Barbara Cartland!

Working on the cleanup operation after the 1957 storm damage

Clean up operation after the 1957 storm damage 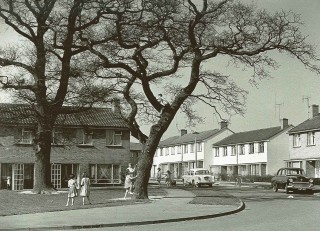 Ken Wright, who worked for the development corporation at that time remembers helping out following the storm damage and had an unexpected meeting:

There’s a little story that I have been waiting for an excuse to say…(laughter) on the day that those roofs…well the night they blew off…the following day because I worked for the development corporation. Everybody in all our offices was down here in Hatfield helping to move people out. We moved them to all the unoccupied houses in Welwyn Garden City and in Hatfield. I mean we borrowed removal vans and using our own vehicles and everything. But anyway at the end of the day around about 6 o’clock we’d been working all day doing this….we were told that if we went to a hut somewhere or another which I think was at the end of Briars Lane. You’d get something to eat. So the driver that was with me, we went there. We sat down and a lady served us with sausages and mash and as I understand it, it was Barbara Cartland. I don’t know how true this is. We were led to believe it was Mrs McCorquodale (married name of Barbara Cartland) who I believe was in the WRVS. So I’ve never been able to prove this but I’d like to know whether I was served sausage and mash by Barbara Cartland! (very likely it was, very likely). We are talking a long time ago (was she wearing white furs!). Yes, she had a poodle!