You are here: Home>Topics>Work>Paul Robertson talks about the power cuts of the 1970s and how these affected Stevenage

"It was pretty cold, standing up there on the stage playing records and it was all done by battery power and there’d be one or two light bulbs hanging from the ceiling, but everybody was dancing." 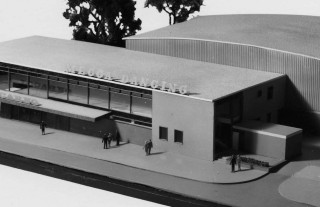 Paul: Then we went through an awful stage didn’t we the three day week. In Stevenage. Three day week but the Mecca used to open and we used to just play the disco and we had where the gent’s toilet was, at the front of the building, was in the back of that was a big UPS panels which was batteries. Hundreds and hundreds of like, lorry batteries, and they had to be charged up during the day and at night when the power went off I remember standing on stage in a sheepskin coat, looking like, I used to have one of those big sheepskins, like Delboy. I had one of them it was pretty cold, standing up there on the stage playing records and it was all done by battery power and there’d be one or two light bulbs hanging from the ceiling, but everybody were dancing. They’d have their coats on but they’d still be dancing. The morale was good. It was always fast records, fast records all night long and the band they used to play as well but some of them, electric guitarists they couldn’t do it so they had to bring acoustic guitars with them.

Interviewer: So, that was the oil crisis wasnt it?

Paul: It was yeah, Ted Heath was around then yeah he was in charge at the time, we had power strikes then yeah. With Ted Heath and the Conservatives.

Interviewer: So they actually turned off the power?

Paul: Oh yeah the power went off all the time.

Interviewer: For the whole town?

Paul: Yeah the whole of Stevenage would be in darkness, yeah, yeah. Yeah it went out, it went off at 8 o’clock at night and that was it. Once everyone had their dinners cooked and kids to bed, lights went off, yeah.

Interviewer: I’ve never heard about that before.

Paul: The power cuts in Stevenage?

Interviewer: Was that just in general or just in Stevenage or…?

Paul: No, no no! It was nationwide, nationwide, you Google, I think 1974. I remember it very well cos I was standing up on that stage. It went on for quite a while as well. It wasn’t just one weekend it was quite a… 1974 powercuts.

Interviewer: So was that just three nights a week?

Paul: Ah no it was every night of the week. They used to turn the electricity on for commercial use and for our industry. But then they used to save the power, reserve the power so households didn’t matter. You know schools didn’t matter. And of course the only thing that they did do was to say, well we’ll let the dance halls open, the bingo halls and all that, we’ll give them a bit of power because they’d keep the morale up of the people. So the Mecca opened up, and it was one light bulb behind the bar and that sort of thing, one lightbulb on the staircase I think they used to shut down the upstairs of the Mecca. Nobody was allowed upstairs as it was just too much to light up. And when the batteries started going, the records got slower and slower, remember that, used to get your finger in try and get the speed up on the records and when it was totally gone, that was it. Eleven o’clock shut, everybody go home.