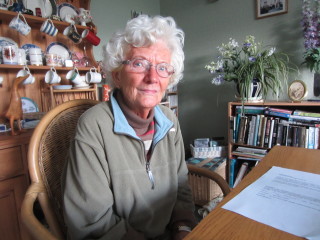 This is a typical 1956 house really, it was new, in fact it was the last one for sale. It was just this row here, none, the bigger ones further up, there were no houses there. There were two very big houses with a lot of ground around, one belonged to a very, quite a famous local man, I believe, called Mr Secretan and the other one belonged to Doctor Jamieson. Well they pulled those down and built the bigger ones, further up. So and this one was the only one that was left and we were desperate to get in, largely cos I had to get somewhere you see and we were very happy with it.