You are here: Home>Topics>Moving in>Jessie Axford - moving to Hatfield new town in 1956

Moving to a new house and building work

Jessie Axford on moving to Hatfield and the new housing 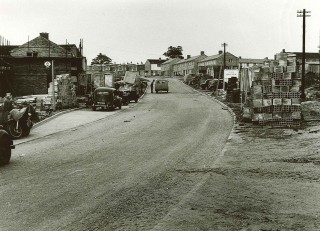 Interview taken in 1999 as part of the Boomtime / Hatfield Voices Project.

Jessica Axford was living with her husband, in her Aunt’s house in Surrey before coming to South Hatfield. The move to Hatfield meant more space, but it was not all plain sailing. She describes here the way her new house in Robin’s Way had been built:

“We came to South Hatfield through the New Towns Commission in September 1956 from Surrey. We were offered a house in Robin’s Way, South Hatfield and (we) were very pleased to move into a house to ourselves as we had been living in one room and sharing kitchen etc in my Aunt’s house. We watched the estate grow. Our Wimpey house was a new quick way of mass building. The hill was just cut into and these steel meshes were erected and then filled with stones and rubble, then covered with concrete. The flat roofs were wood frames covered in aluminium. We had to move the soil which was orange clay up the garden, as it was a 3ft wall only a couple of feet away from the back door and windows and would make an awful mess.“