You are here: Home>Topics>Growing Up>Brian Foster talks about the earwig invasion of the summer of 1959 in Stevenage 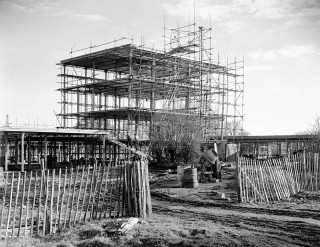 It was a good place to grow up.  I had a very good education here, good school, there was not much crime – it was safe.  Kind of dull and the whole place was, now it looks rather green and leafy then the trees were sad little saplings stuck in.  And everything was a sea of mud and chalk, you know, white mud.  There was the summer of 1959 was a very hot summer and because the whole town was being churned up – it was a building site as far as the eye could see there were the most extraordinary insects came out of the ground that summer. It was the earwig invasion.  Thousands and thousands of earwigs emerged and bred in the heat you know. My aunt who just died hated insects of course so she wouldn’t get up until her husband had gone around the house and shaken all the earwigs out of the curtains and during the day – if she saw an earwig she’d put a jam jar over it and he’d have to deal with it when he came home. So he’d come home to an array of jam jars around the house. But by the end of that summer the earwigs were mutating and every house was surrounded by lines of white insecticide powder and by the end of the summer new earwigs were emerging with white stripes on across their backs and they would just plough through this stuff I mean it was kind of scary watching it. And there were, I’ve seen spiders and that I’ve never seen before or since.  You know you’d wake up and there’d be this huge insect – some of them bigger than your hand.  You know little body and enormous legs up on the ceiling.  It was an extraordinary summer – real invasion of the insects.