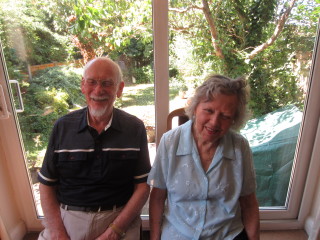 Problems that arose when trying to secure their first home together.

Where the Watertons lived, with Sonia's parents, after getting married

(T): When we got married, which was the thing that sort of upset us was, we couldn’t find anywhere to live. If you came into the ‘New Town’ you were given a house or a flat or whatever but we, who’d lived here, well I’d lived here all my life and Sonia had come and we couldn’t find anywhere to live cos we weren’t given any houses. Initially we thought we were going to get a flat, down again more or less opposite where the Pavilion was, you wouldn’t remember, there was the Hunters School of Dancing down there in one of the old houses. We were going to have a flat above it and then at the last minute, the lady she changed her mind and decided she was going to use the upstairs as well so we suddenly found ourselves, you know, just before we were going to get married, with nowhere to live. So we had to spend a year living with Sonia’s parents in Adeyfield Gardens, in two rooms, where other people who hadn’t, were coming and getting houses and flats, so it didn’t go down a bomb. The big thing, and this is nothing to do with me really but, I mean but if they had mixed us up, if they had given us, the people who lived in Hemel like us, some houses or some flats and we’d all been mixed together, I think two things would have happened. One, there wouldn’t have been so much opposition and secondly we’d have blended together more and it wouldn’t have been the ‘New Town’ and the ‘Old Town’ I mean that’s just how I feel about it, but you know.