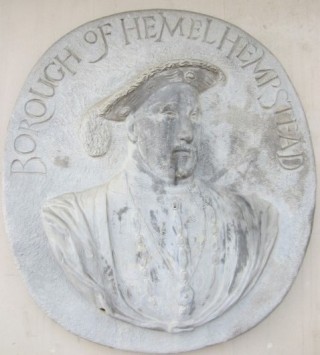 Plaque of Henry VIII on the outside of the Hemel Hempstead Civic Centre.
The Dacorum Heritage Trust

The Dacorum Heritage Trust (DHT) is the Accredited Museum for the area of Dacorum.  However, unlike traditional museums with public galleries, it exists as a museum store. Due to this fact, the staff and volunteers at DHT have to think quite creatively about ways to take objects and stories out into the community.

DHT is based in a converted fire station in Berkhamsted where it houses in excess of 110,000 artefacts relating to the history of the Borough. The collection is varied and includes paintings, photographs, documents, archaeology and textiles as well as many local and social history artefacts. It covers a period from Neolithic times (around 6,000 years ago), to the present day and gives a wonderful insight into the long history and culture of the Dacorum area.

At the end of July 1946 it was declared that Hemel Hempstead was to be designated a New Town under the New Towns Act. The population was to be increased from 20,000 to 60,000.  The Hemel Hempstead Development Corporation arranged a grant of Arms in 1948 with a motto “Majora, Uberiora, Pulchriora” which translates as “Greater, Richer, More Beautiful”. The motto symbolised the hopes and aspirations of the New Town.